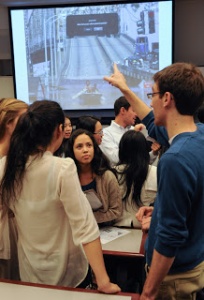 Put about 25 college students in a room and give them varying levels of power.  Now, make them represent various countries and group them together based on whether that country is developing or developed and separate the superpowers like China, India, the U.S., and Russia.  Finally, make them come to a conclusion on how much each group can cut their CO2 emissions.  Seems like a great plan, right?

On October 31st, we did just that.  We participated in a UN Climate Change Negotiation Simulation to try and make decisions to curb the effects of climate change.  The group included not only our class but also various other students who, generally speaking, are much more likely to acknowledge the reality of climate change and be in favor of cutting CO­2 emissions.  Even with a group of environmentally conscious students who were merely simulating the negotiations coming to a consensus proved difficult.

We had three sets of negotiations and after each twenty-minute negotiation, got closer and closer to a viable decision.  We used a program from Emory Professor Eri Saikawa, which calculated temperature change and sea level rise based on each of our outcomes.  Our final decision resulted in a temperature rise of about 2.5° Celsius over the next 50 years—about what is expected from the upcoming COP in Paris.

The simulation was a great way for students to get a better idea about the negotiations that will be taking place in December and it also allowed students to gain experience in negotiating.  Although it was only a simulation, it was great to get a taste of saving the world!